A group of bikers who identify themselves as The Patriot Guard Riders (PGR) went above and beyond and made sure retired marine Jonathan Turner received a deserving send-off.

Turner originally came from Georgia but decided to stay in California after service.

Unfortunately, Turner developed combat-related issues which led to his passing.

The Marine Corps had planned a service in his honor, but Turner’s family back in Georgia could not afford to attend the service and receive his cremated remains.

Turner remains needed to be shipped back to his family — which is about 2,000 miles away.

Instead of letting FedEx ship his remains, PGR stepped in and said they were not going to let this happen on their watch — They organized themselves and managed to carry Turner’s remain across the country, back to his family.

The bikers split themselves into groups. One group would drive Turner’s remains to another group. The act was repeated until the remains reached his family.

Over 100 bikers were involved in making this a success. 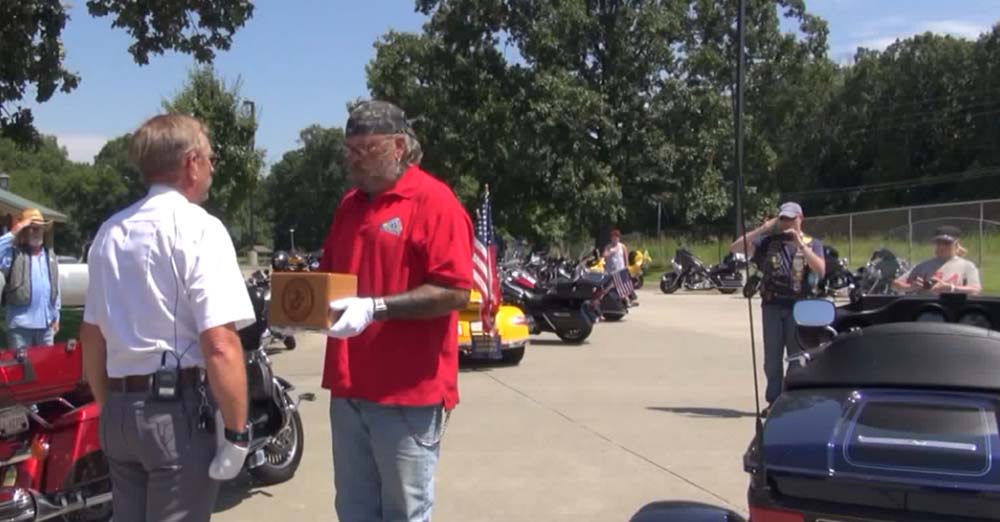 “It’s heartwarming to see all these people here,” Turner’s mother told Fox 5 Atlanta. “I know that he was loved by a lot of people.”

It warms our heart to see Turner received a well-deserving send-off after sacrificing so much for his country.

In a world where there is so much hate going on, seeing a group of people coming together for the greater good warms our hearts.

Please SHARE this story with your family and friends.

Several Strangers Work Together To Save A...

Hockey Team Shows Up At The Hospital For...

***If you enjoy our feel-good stories you can help support our site by simply sharing our stories with your friends and family. Don't forget to SUBSCRIBE***

Bikers Offer to Transport Marine Remains after Finding Out They’ll Be...

Hockey Team Shows Up At The Hospital For Their Teammate’s First...

Crying Too Much Is Prohibited At This Grandma’s Funeral

Toddler Saying Goodbye To Grandpa Will Have You In Tears

5 Year Old’s Cute Moves Steal the Show at a Pre...

Tell Us Your Story

Want to receive feel good stories in your inbox? Sign up below.

Thank you for subscribing.

we respect your privacy and take protecting it seriously

Several Strangers Work Together To Save A Woman’s Life

A woman from Boynton Beach Florida was saved by a group of strangers. Laurie Rabyor was having a medical emergency while she was driving....

One passenger safely landed a plane on the ground after the pilot became unwell. Darren Harrison, a vice president of an interior design company,...
© Faith Panda 2022
We use cookies on our website to give you the most relevant experience by remembering your preferences and repeat visits. By clicking “Accept All”, you consent to the use of ALL the cookies. However, you may visit "Cookie Settings" to provide a controlled consent.
Cookie SettingsAccept All
Manage consent

This website uses cookies to improve your experience while you navigate through the website. Out of these, the cookies that are categorized as necessary are stored on your browser as they are essential for the working of basic functionalities of the website. We also use third-party cookies that help us analyze and understand how you use this website. These cookies will be stored in your browser only with your consent. You also have the option to opt-out of these cookies. But opting out of some of these cookies may affect your browsing experience.
Necessary Always Enabled
Necessary cookies are absolutely essential for the website to function properly. These cookies ensure basic functionalities and security features of the website, anonymously.
Functional
Functional cookies help to perform certain functionalities like sharing the content of the website on social media platforms, collect feedbacks, and other third-party features.
Performance
Performance cookies are used to understand and analyze the key performance indexes of the website which helps in delivering a better user experience for the visitors.
Analytics
Analytical cookies are used to understand how visitors interact with the website. These cookies help provide information on metrics the number of visitors, bounce rate, traffic source, etc.
Advertisement
Advertisement cookies are used to provide visitors with relevant ads and marketing campaigns. These cookies track visitors across websites and collect information to provide customized ads.
Others
Other uncategorized cookies are those that are being analyzed and have not been classified into a category as yet.
SAVE & ACCEPT