People suffering from certain conditions or disorders may easily get offended by things that seem to make fun of their condition. While these feelings may be legitimate, sometimes they may come across as exaggerated.

A young woman who is a regular customer at a Target store was deeply horrified by a sweater that was being sold at the store.

Reign Murphy was going about her day when she decided to go shopping at Target. While shopping, a red, green, and white sweater caught her attention. She picked the sweater up and was shocked by the “insensitive” words emblazoned across the front of the sweater. 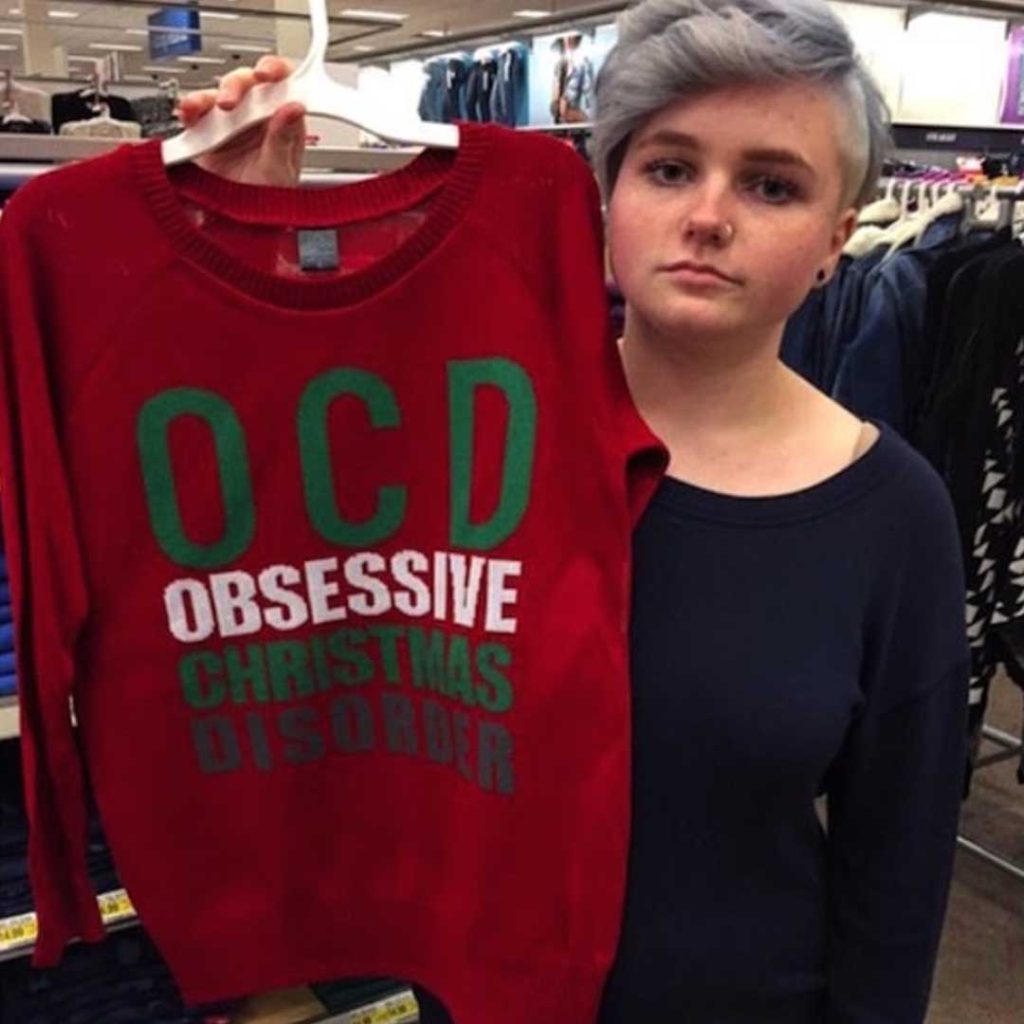 The phrase on the sweater read “OCD Obsessive Christmas Disorder.”

Reign, who was suffering from the real OCD at the time, was deeply offended by the phrase that she snapped a photo and shamed the US retailer for making fun of people with the psychological disorder.

She later shared a Tweet alongside the photo that went viral immediately receiving over a thousand retweets. The tweet read “I’d really appreciate it if you didn’t sell my mental illness as a fashion statement.” 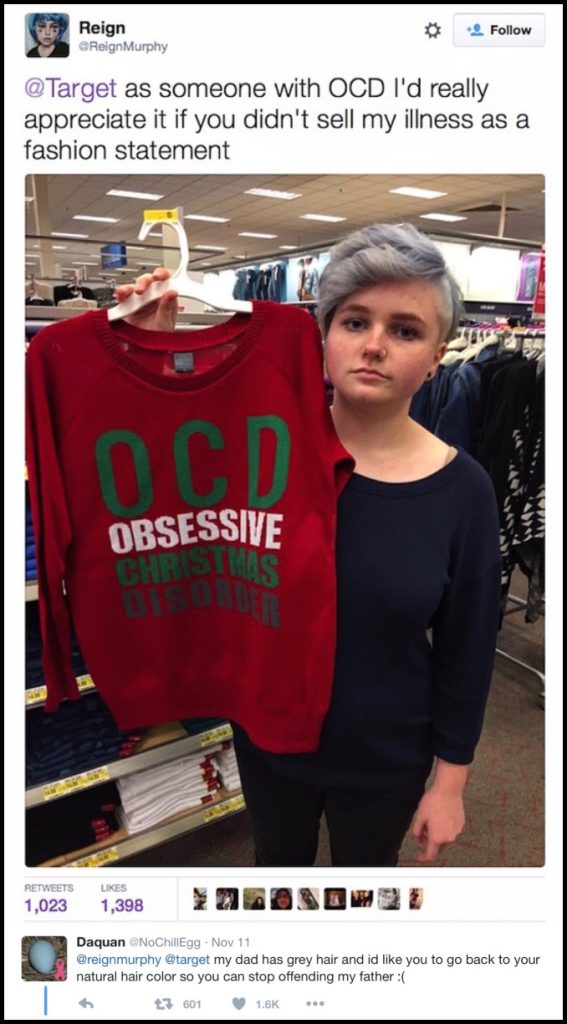 Although the phrase on the merchandise has been used by many product designers — to describe those who love everything Christmas, and perhaps go overboard, the play on obsessive-compulsive disorder had some internet users enraged while others thought the message was neither offensive nor hurtful despite dealing with the disorder themselves.

Social media users with similar sentiments blasted the large US retail store for what they say was “picking fun at mental health.”

“I am annoyed we still live in a world where picking fun at mental health is okay,” a comment read.

“Why is trivializing a mental disorder so widely accepted?” another comment read. 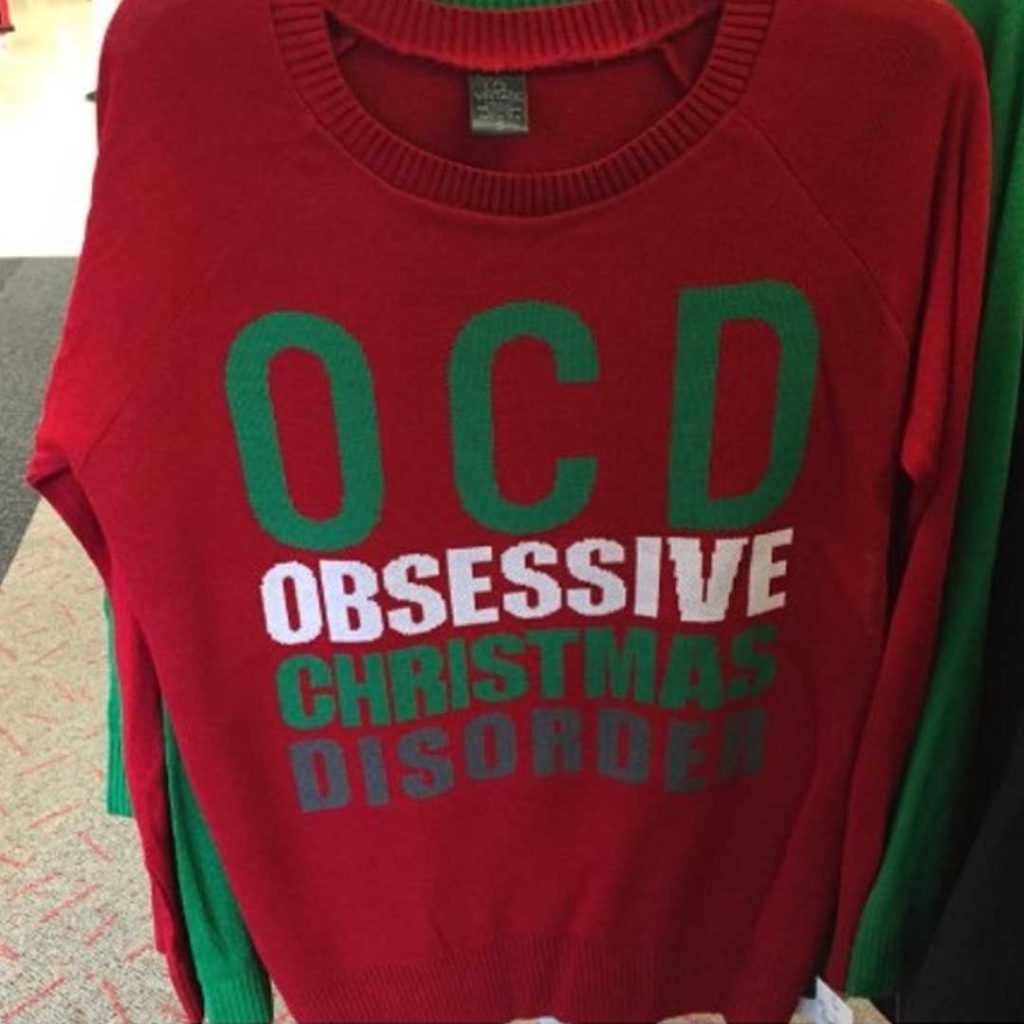 But other internet users who claimed to have had OCD felt the rage against the store was unnecessary and defended the sale of the controversial sweatshirt.

“As someone with OCD, Target’s OCD sweater doesn’t offend me the least bit,” a user posted.

“As someone who has OCD, I don’t see any reason to be angry about Target’s ‘offensive’ sweater – it’s perfectly even!” another user posted.

Jessica Carlson, Target’s spokesperson, eventually responded to the backlash and apologized to those offended by the merchandise but insisted they had no plans to remove it from its shelves.

“We currently do not have plans to remove this sweater,” Carlson said

As per the Anxiety and Depression Association of America,  approximately 2.5 million or 1.2% of the U.S. population suffer from OCD.

In 2015, Target was under controversy after another woman claimed some of their women’s T-shirts with the word “Trophy” on the front were insulting. According to her, these T-shirts led to the belief that a woman could be bought or sold.

Watch the video below and let us know what you think about this story.