Netty, a mixed pit bull, arrived at a Pennsylvania SPCA shelter in 2010 and was adopted three days later.

After 12 years, Netty lost what she called home when she was returned to the same shelter this summer. Her owners abandoned her. 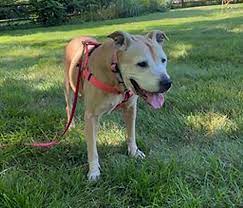 Maddie Bernstein, the Pennsylvania SPCA’s manager, says she was elderly and had some incontinence issues at home. Netty’s owners had given up on her and were not interested in finding other medical options to treat her.

Maddie’s co-workers believed the dog still had a chance at a good life. They assessed her, and she began to improve after the medications. Netty’s steady improvement convinced the staff that it was time to find her a new home.

They anticipated difficulties in settling her because Netty was an elderly dog with special needs. They shared Netty’s story on social media, trying to find her a new owner to lavish her with unrivaled love.

The care team appealed to have someone take her and provide Netty with a home to spend her final days. Amy Kidd, a veterinarian, was one of the people who received the news and contacted the shelter right away and offered to adopt Netty. 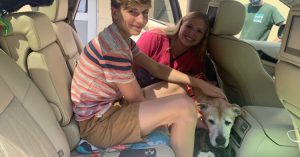 Kidd’s household expressed interest in Netty because, in the recent past, it lost a 12-year-old dog to cancer. They have since been looking for a new senior dog to adopt.

Kidd expressed how happy she was to see her on the post and longed to give her a home.

For the past eight years, her family has cared for senior dogs with a life expectancy of one to two months. Some of them survived for up to four years longer. Kidd, who owns the Popcopson veterinary clinic in West Chester, was at work when her daughter and two sons picked up Netty from the shelter.

They didn’t mind the 40-mile journey to the shelter because they were so excited to see their new friend. They even brought along the other senior dogs to ensure that Netty would get along with them.

According to Supplick, Kidd’s daughter, Netty, did well on the hour-long drive to her new home and settled in. She became a member of our family. Supplick also revealed that she purchased a stuffed bear for Netty from Amazon. She added that Netty is fond of the bear and cuddles and carries him around the house. 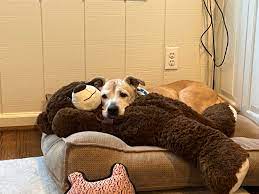 Netty’s condition improved thanks to medication and the daily love she receives from her family. Her elbows and lower spine improved as well from the treatment.

Netty has become the house queen bee; she walks around, and the new owners want her to be alive for a long time.

Kidd’s daughter is happy to have Netty and says she is blessed to be with them. I hope her story inspires others to give adult dogs a second chance.

Charles Kimbrough, star of ‘Murphy Brown,’ dies at the age of 86— may he rest in peace

Faith Panda - February 6, 2023 0
This is a heartwarming story of a mother's love and her determination to never give up on her child. It is a reminder of...
News

Faith Panda - February 3, 2023 0
Alec Baldwin is now facing legal consequences for the death of a cinematographer during the filming of Rust in 2021. He was charged with involuntary...
Good Stories

Steve Harvey thanks God for his life and successful career

Dickens O. - September 7, 2022 0
"God has blessed me with a life far beyond anything I could have imagined." Many people are familiar with Steve Harvey's successful career as a...
Animals

Faith Panda - January 30, 2023 0
When a child goes missing, it can be a very scary and overwhelming experience for parents. They just want to protect and love their child,...
Facebook Instagram Twitter
© 2022 Faith Panda