A woman from Boynton Beach Florida was saved by a group of strangers. Laurie Rabyor was having a medical emergency while she was driving. Rabyor and her co-workers were driving home from work in their separate cars. Her co-worker Jannette Rivera noticed her unconscious body behind the wheel and jumped into action.

In the video posted by Boynton Beach Police, Rivera is seen running after a car as she waves her arms for attention. Soon after, a man dressed in a military uniform gets out of his car and starts running toward the vehicle. Another man also gets off his car and rushes to the front of the vehicle as he tries to stop the car using his mere strength. By the time the man in uniform gets to the car, other strangers approach and start helping to stop the moving car. 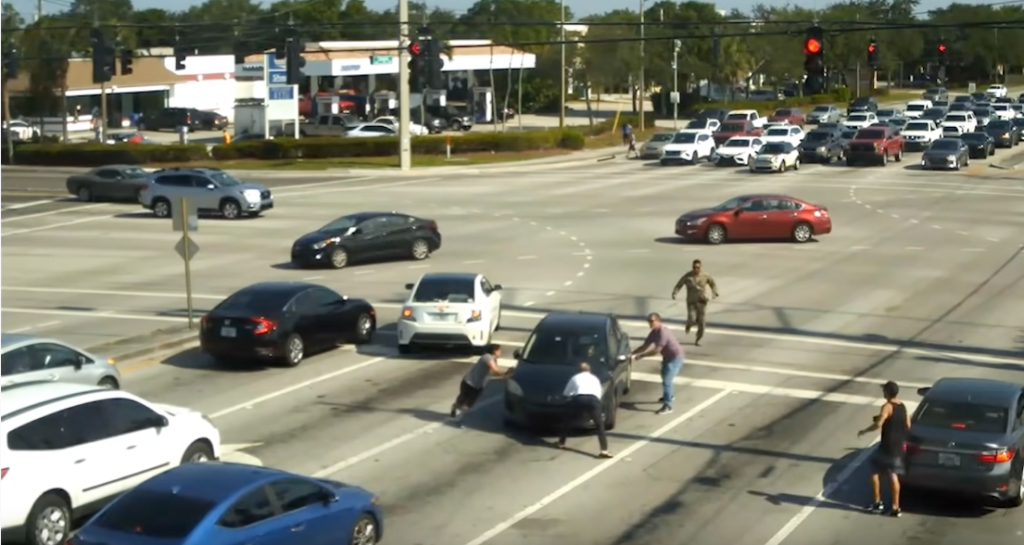 In the process, one of the good Samaritans grabbed a dumbbell from her car as another used it to break the passenger’s side window. Another good Samaritan climbs into the car through the smashed window and unlocks the vehicle. Once the car was put in park, the Good Samaritans pushed the vehicle to a nearby parking lot.

Boynton Beach Police posted the video on their YouTube to honor the several Good Samaritans. ‘We want to honor the Good Samaritans who stopped to help, but we need help identifying all of them. If you or someone you know helped in any way, please contact PIO Stephanie Slater at slaters@bbfl.us.’ They wrote in their video.

“I didn’t think about my life you know. I just like saw her going through the other car, the other car was going to hit her and I’m like oh no she’s gonna get hurt but you know, I tried to do my best,” said Rivera.

“I observed from across the street. All these amazing people doing an amazing thing and at the very end, I come in to put my hand on your throat and feel a purse” said Robyn Fox. Fox was among the Good Samaritans who is also a nurse. Fox assisted medically until the fire department arrived.

“And they all just came together just to help little old lady me. I appreciate it so so much you don’t even know. My children love you” Said Laurie in tears thanking the Good Samaritans. Laurie said a mix-up of pressure pills and fasting for a colonoscopy knocked her out. The several strangers reunited and got honored by the police department. The Good Samaritans including Laurie received gifts from the community, and a $2000 gift card.