Russ, a 4-year-old pit bull, was roaming Philly’s streets. When ACCT animal shelter staff found him, he looked like he had taken a lot of beating for a while. He was emaciated; had patches on his skin with missing fur, and was terrified of humans. But the team worked to gain his trust and get him into the car.

Kayla Filoon was one of the volunteers at Philly’s ACCT shelter. She volunteered to walk dogs from the shelter when she had a break from her school work. When he saw Russ, she felt like something was different about him. While all other dogs were causing a racket, he just sat there, quietly.

Filoon Falls in Love with Russ on Their First Walk

As usual, Kayla had to walk the newcomer. During their walk, Kayla noted that Russ was a quiet and polite dog. He didn’t bark at other dogs in the park; he just quietly walked alongside her. That is the part where she fell in love with him and thought of adopting him.

Filoon called her mother for advice. But her mother was used to her kind nature of falling in love with the shelter dogs she walks, and didn’t think she was serious. However, as time went by, Kayla couldn’t shake the thought off her mind. 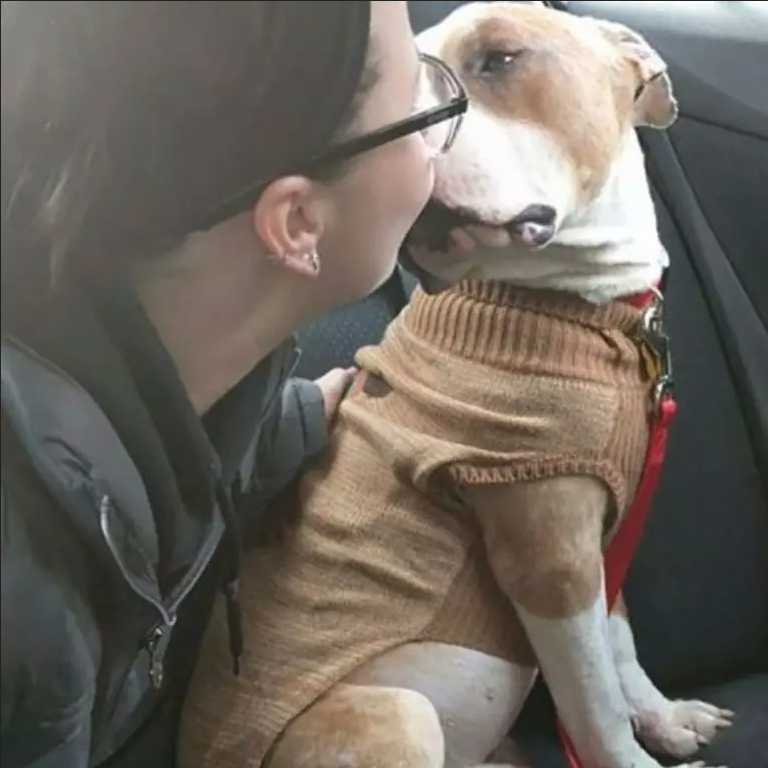 As fate would have it, the shelter was getting crowded. This is the nudge that Filoon needed, and she made up her mind to adopt Russ. At the end of that day, she went home with him.

But there was one slight problem; Filoon had not informed her housemates that they will be having a newcomer. Luckily, they all fell in love with Russ too, as he was such a delightful dog. His new home was a world’s difference from the rough streets.

Russ took a few days to adjust to his new home, which was very quiet compared to the shelter. He slept a lot the first few days as a result of a bout of kennel cough. He got well quickly enough to start enjoying his new life. There was one tiny thing about him though, he was overly affectionate and couldn’t stop hugging Kayla.

One evening, as Kayla was working on her homework, Russ positioned himself, adorably hugging her and wouldn’t let go despite having his own bed nearby. Kayla’s roommate took several shots of the adorable duo and posted on social media. The post went viral, with thousands of reactions, shares and comments.

Kayla is now using the platform to encourage more people to adopt shelter animals. She still volunteers at ACCT animal shelter. Russ’ condition has significantly improved since, but according to Kayla, he is still such a love bug!

Wild Gorillas Sing And Hum During Their Favorite...

***If you enjoy our feel-good stories you can help support our site by simply sharing our stories with your friends and family. Don't forget to SUBSCRIBE***

Bikers Offer to Transport Marine Remains after Finding Out They’ll Be...

Young Man Becomes Dad To 2.4 Million Kids And Adults Without...

Woman Making A Difference By Cleaning One House At A Time...

Tell Us Your Story

Want to receive feel good stories in your inbox? Sign up below.

Thank you for subscribing.

we respect your privacy and take protecting it seriously

One passenger safely landed a plane on the ground after the pilot became unwell. Darren Harrison, a vice president of an interior design company,...

School Bus Driver Returns To College and Gets His Teaching Degree after Students Inspire...

Inspiration comes from the most unlikely places. For 30-year-old Clayton Ward, it came to him through his students. The 30-year-old bus driver had his...
© Faith Panda 2022
We use cookies on our website to give you the most relevant experience by remembering your preferences and repeat visits. By clicking “Accept All”, you consent to the use of ALL the cookies. However, you may visit "Cookie Settings" to provide a controlled consent.
Cookie SettingsAccept All
Manage consent

This website uses cookies to improve your experience while you navigate through the website. Out of these, the cookies that are categorized as necessary are stored on your browser as they are essential for the working of basic functionalities of the website. We also use third-party cookies that help us analyze and understand how you use this website. These cookies will be stored in your browser only with your consent. You also have the option to opt-out of these cookies. But opting out of some of these cookies may affect your browsing experience.
Necessary Always Enabled
Necessary cookies are absolutely essential for the website to function properly. These cookies ensure basic functionalities and security features of the website, anonymously.
Functional
Functional cookies help to perform certain functionalities like sharing the content of the website on social media platforms, collect feedbacks, and other third-party features.
Performance
Performance cookies are used to understand and analyze the key performance indexes of the website which helps in delivering a better user experience for the visitors.
Analytics
Analytical cookies are used to understand how visitors interact with the website. These cookies help provide information on metrics the number of visitors, bounce rate, traffic source, etc.
Advertisement
Advertisement cookies are used to provide visitors with relevant ads and marketing campaigns. These cookies track visitors across websites and collect information to provide customized ads.
Others
Other uncategorized cookies are those that are being analyzed and have not been classified into a category as yet.
SAVE & ACCEPT